The State of Nebraska received two awards at the CA World Conference held in April, 2007 in Las Vegas, Nevada. CA, formerly known as Computer Associates, is a worldwide software company. Specifically, the Office of the CIO and the Department of Roads were recognized for the recent implementation of Clarity (our Project Management software from CA) at the Department of Roads.

The first award was for being a top ten finalist for the overall CA VIP award. The second award was for being the CA Clarity VIP winner for Vision. "VIP" stands for Vision, Impact, and Progress. One award is given in each category. The Vision category is described as "success in achieving excellence in IT management and for demonstrating a clear vision of how IT supports overall enterprise success".

The Roads Project was a collaborative effort between the Office of the CIO and the Department of Roads Project Planning and Scheduling team. The uniqueness of the project is that we were able to create two separate applications, one IT and the other non-IT, in the same Clarity environment. Each application has its own data elements and processes and is not visible to the other application.

This project also represents progress towards the Governor's objective of efficiency in State government through reduced software and hardware costs and supports the Office of the CIO's objective of shared services between agencies. 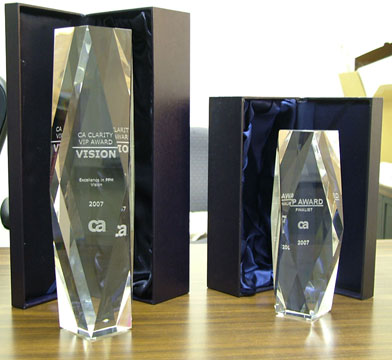