OCIO Home / Blog / What I Learned on my Journey to Leadership

Blog: What I Learned on my Journey to Leadership

Robert Fulghum wrote a book that I think says it all. First published in 1986, “All I Really Need To Know I Learned In Kindergarten.”

“Wisdom was not at the top of the graduate school mountain,
but there in the sand pile at Sunday school.”

Three years too late for me...

I want to start with some background of my journey towards where I am today, and how my style of leadership was ingrained in me from my first job after graduation from college.
My book would be titled...

“All I really need to know about leadership, I learned in Manufacturing… from a guy named John.” 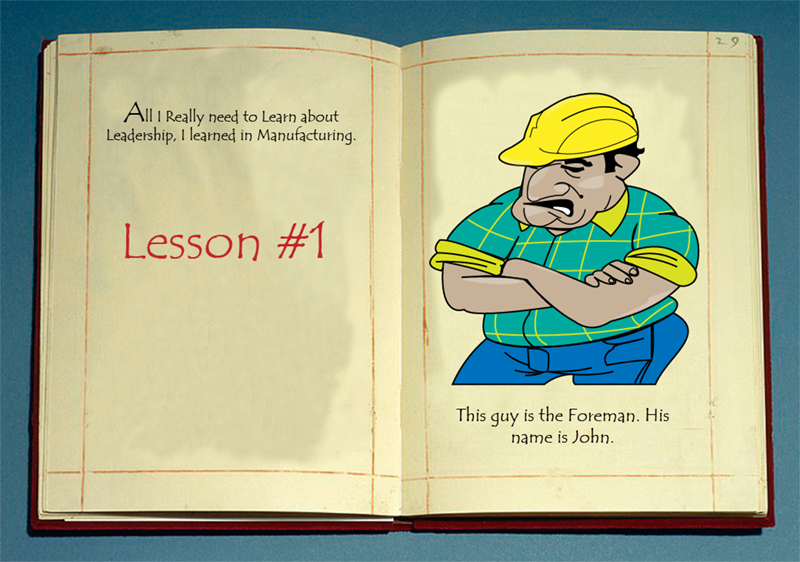 In 1983 I was hired as an Industrial Engineer in a manufacturing plant in Waco, TX. It was my first job after college, and with the Texas economy in recession due to the decline in the oil business, I was fortunate to have work. An Industrial Engineer works to eliminate waste through Process Improvement (Sound familiar?).  The concept came easy to me and it has always been my passion. This was a job that you normally worked independently, and in many manufacturing plants you worked without a team.

So what does that have to do with leadership?  Little did I know!

After a couple of days on the job I was informed by my boss that the prior Industrial Engineer also managed the Maintenance Crew, so he felt that I should do the same. Not even knowing what that would mean, I eagerly agreed.

Later that day, a very large man came into my office, sat down, took out a cigarette (yes, you could do that in the 80’s) and without introducing himself said, “H...! I have tools older than you”.

Now with a lit cigarette, he realized I did not have an ash tray which became a little comical as he used my empty coffee cup. I came to find out after several other questions that he was the foreman of the maintenance crew and his name was John.

Eventually he agreed to introduce me to the team and as we walked to the maintenance office he casually mentioned that, union rules state that the penalty for striking anyone (including your new boss) were three days suspension without pay, for the first offense. He also added that, none of his crew had made use of their first offense. Note to self. I replied “Wow! Three days without pay”, trying to make it sound like a big punishment.

Eventually, over time, I won John and the team over by using my mandatory Saturday work to spend time with whoever had the weekend duties. I had to be in the office from 8 a.m. to noon every Saturday, so I would check in with my boss and then go out to see what the projects were for maintenance that day:welding up a cooling tower or fixing a piece of equipment.

Before I can reveal my list of the things I learned about leadership (in manufacturing), there is one more event that has stuck with me throughout my entire career. We were troubleshooting a piece of equipment that had stopped working, one Saturday. I was sure it was the solenoid that was the problem and wanted to have the maintenance person I was working with check with his voltmeter. It was 480V distribution voltage, but I was sure the solenoid was only 24v or lower voltage. I was very close to him as we were inspecting this machine when he pulled out the probes on the voltmeter and then stepped on my foot.  With some measure, he asked me one last time, “Are you sure now?”

The end of this story is that after several years in my position the plant went on strike, but every one of the maintenance workers crossed the picket line to maintain the plant.

So here is what I learned about leadership: